It Puts the Buttercream on It’s Cake Or Else … 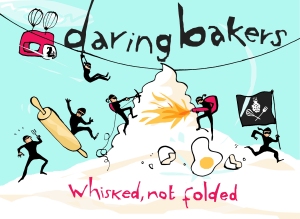 Aaaah it’s Daring Bakers time again kiddies!  This time the recipe is a:

I managed to be in a foreign kitchen for yet another challenge.  Faaabulous. However, the timing was perfect because I was on vacation with my family and for our annual “Happy Birthday to Everyone” party, I am the delegated cake-maker.  I didn’t tell anyone in my (Southern, meat, butter, cheese, milk loving) family that this happened to be a vegan cake until after everyone finished swooning over how delicious it was.  Oopsies?  I also had to explain what the word vegan meant to a couple people, but hey, it’s all about spreading the word one cake at a time.

I must be honest, I cut a lot of corners trying to make this recipe as close to the original as possible – and vegan.  The hard part was figuring out how to substitute the obscene amount of separated eggs.  So, I made two 9″ cakes – based on a VCTOTW recipe for Almond Cupcakes.  In one cake, I used corn starch as an egg substitute and soy yogurt in the other.  Silly me forgot which cake was which when they were in the oven so my experiment was for naught.  One of the cakes rose a lot higher and was fluffier (probably the soy yogurt?) and the other was denser and rose 2/3 as much as the other.  It would be good to know which was which!  I skipped the whipped cream all together because I simply didn’t have the resources to make it work 😦 The buttercream was also a VCTOTW recipe with my filbert almond paste added.  That’s right kiddies, it’s all almonds all the time.  I used the VCTOTW ganache recipe – can we see a theme here?

Oh, isn’t that lovely?  Obviously I need to work on my ganache skills.  I think I just needed to make a bigger batch and do a second cover.  I read a few tutorials, and next time it will be shiny and smooth like a really nice hairstyle.

I did use rum in my sugar syrup and in the buttercream – I like the added kick that alcohol adds to baked goods.  When I worked in a French bakery, we brushed layer cakes with cointreau and other liquers.  I also used apricot preserves to cover the crumb layer under the ganache.  I hate fruit with chocolate (except strawberry) but the apricot flavor was just a whispy hint of something special – really lovely.

The final product was immensely lauded.  The joke going around the table was how impressed everyone was with my skills – my driving to the bakery and picking up cake skills.

A rather unappetizing look at the inside of my cake – but it was devoured so quickly that this is all I got!  This isn’t my proudest Daring Bakers attempt, but I think it might have been the most delicious (so far).

This entry was posted in Uncategorized and tagged cake, daring bakers, vctotw. Bookmark the permalink.