I can’t understand why I didn’t make these before.  They’re Isa’s recipe from the Post Punk Kitchen, and clearly they are ace.  The perfect balance between fudgy and cakey brownies and a deep chocolate flavor make these epic.  The best part about them is that they get better the longer you let them sit!  Thus, I dub them “Next Day Brownies.”

I had a party and people kind of picked at them as they cooled, but it was the breakfast brownie the next morning that made my eyes roll back in my head.  What’s the deal!?  Something about sitting in the fridge overnight allowed the chocolate chips I added to the batter to harden and the flavors to mingle together in bliss.   I added 1/4 C chocolate chips and 1/4 C walnuts to the recipe for my own preference.  I’m now imagining all the add-ins that could make these even more incredible!   These brownies are bomb.  That’s all I can say.

Brownies For the Win AKA Stop It With the Chocolate Already

These bad boys are adapted from Have Cake, Will Travel’s Butterscotch Chocolate Fudge Brownies.  Thanks for sharing!!

in a microwave-safe bowl (or in a double boiler), melt:

set aside to let cool.

place melted chocolate in a large bowl and whisk in:

in a separate bowl, sift together:

mix until combined. pour batter into prepared pan, bake for 28 minutes. let cool on a rack, place in fridge (still in pan) once cool enough or even in the freezer for more ease of slicing. I love to eat these when they’re really cold!

I didn’t have access to sweet potato puree (really I’m just to lazy to puree potatoes) so I used a canned butternut squash puree.  I also can’t find vegan butterscotch chips in this neck of the woods (which is kind of unbelievable considering the monstrosity of this city).  I doubled the recipe because I’m a nut (and I wanted to share these beauties with everyone).  That last fact turned out to be a bad idea because I polished most of them off by myself.  I had a few days when I ate these for breakfast and felt heart paliptations for hours.  Wheeee!  I also used almond milk because … I had some. 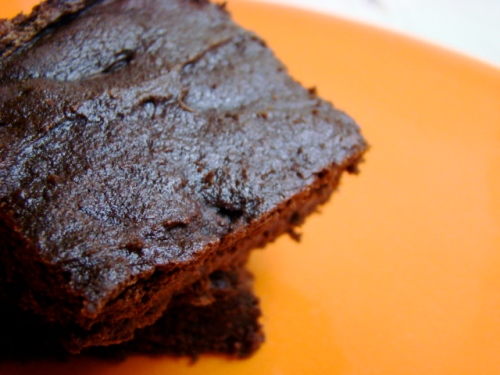 When I first tried one of these, I wasn’t really sure how I felt about them.  However, after chilling them in the fridge they took on this moist, chewy texture that is amazing.  They’re very dense, which is the way I like a brownie to be.  They’re still not quite what I’m looking for as far as replacing egg/milk laden brownies, but they are definitely a giant leap in the right direction!  I think I’ll try adding flax and Earth Balance on the next trial – which will be a while from now.  I’m still recovering.